28 Days to Save the World

28 Days to Save the World

The proceeding is the sharing of an article posted by the Medical Alley Association on July 1st, 2020, written by Velentium CEO, Dan Purvis. The original can be found here.

Project V started March 20 at Ventec Life System’s office in Greater Seattle, only three weeks and nine miles away from the first fatal cases of COVID-19 in the United States. In the time since the virus’ arrival, the number of confirmed cases across the nation has escalated to just below 20,000. 249 patients have died. Hospitals, states, and countries all over the world are urgently seeking to acquire ventilators, and manufacturers are scrambling to find ways to supply them.

General Motors has sought a partnership with Ventec that would allow the two companies to mass-produce Ventec’s VOCSN system, which integrates five separate medical devices (ventilator, oxygen concentrator, cough assist, suction, and nebulizer) into a single multi-function ventilator. The VOCSN is well-suited to emergency response, in part because that ingenious 5-in-1 design means it’s ideal for deployment to temporary hospitals like those that were being planned for New York’s Central Park and numerous empty conference centers and sports arenas in major cities.

From my perspective, the VOCSN is the right device for the need, but Ventec only has the facilities to produce a few hundred units per month. That’s where GM could come in, but there’s a problem: GM manufactures cars, not medical devices. No question that they know how to build stuff—but do they know how to build this stuff?

And this partnership has to work. Every delay means more patients at risk, more patients dying. We’d seen projections, and we would see more later after the White House got involved. They weren’t positive. I was haunted by the thought that unless we act quickly, in some ICU in the very near future, it might come down to your mom, my mom, and one available ventilator.

I didn’t know it yet, but New York’s governor, Andrew Cuomo, was about to approve an emergency experimental procedure called “splitting,” which connects a second set of tubes to a ventilator so that two patients can use it simultaneously. Splitting doesn’t work well — because of differences in oxygen level needs, lung capacity, and so forth between patients, not to mention the cross-contamination risk — but at that time, there was no better alternative. While they waited for new ventilators to be built, hospitals were also converting anesthesia machines, even hacking CPAP machines, to repurpose them as emergency ventilators. There was no time. We needed tens of thousands more ventilators. We needed them a week ago.

This partnership has to work.

Before COVID-19 disrupted the world, Velentium had grown from a 2-person operation in 2012 to a multimillion-dollar design and development firm focused on “changing lives for a better world” by helping clients bring new medical devices to market. Our capability has advanced to the point where we can offer our clients end-to-end solutions, from concept feasibility to postmarket surveillance. We help medical IP move from perceived sci-fi to life-changing reality.

We had never done anything that called for Project V’s scale and speed. Nobody had.

Ventec Life Systems became a client in 2015, which is when we helped them design and create automated test systems for the VOCSN production line. As 2020 began, Ventec’s line was capable of manufacturing a few hundred ventilators each month. Under normal conditions, that was enough production capacity to meet demand — but now we needed more. A lot more.

To enable General Motors to ramp up ventilator manufacturing to the level needed for effective COVID-19 response — 10,000 new machines per month — we would have to source, assemble, document, verify, and supply more of the automated test systems we created with Ventec five years prior.

Ventec and GM needed 141 test systems in all, delivered continuously over the next five weeks.

We shipped the first system only four days after receiving GM’s purchase order.

For Project V to succeed, we needed an equivalent — and extraordinary — level of dedication from our suppliers. And we got it: from suppliers like UPS, who dedicated upper-management resources and re-routed delivery schedules to ensure the parts we needed went out for delivery on the first truck of the day and the product we were shipping found room on the last truck of the day. And from suppliers like Ashcroft and McMaster-Carr, whose staff worked nights and weekends to build and calibrate critical parts (Ashcroft) and source essentials from global inventories (McMaster-Carr).

As a company, we value speed greatly. Velocity is woven into our name, our corporate culture, and our core hiring criteria. We’ve sought partnerships with companies that helps us deliver quality work even faster — partners like Parasoft, whose automated code testing solution allows us to ensure the quality and security of the software we write at speed, and JAMA Software, whose JAMA Connect software efficiently manages requirements, traceability, and compliance for medical device development.

Rapidly establishing that understanding across our whole supply chain wasn’t easy. Some people “got it;” some didn’t, forcing us to try going over their heads or find a new supplier (typically both, within hours of making contact). But we got there. Our suppliers’, engineers’, and technicians’ pace and determination enabled GM to deliver its first shipment of new ventilators on April 17, just 28 days after our first meeting with them at Ventec’s offices in Seattle. 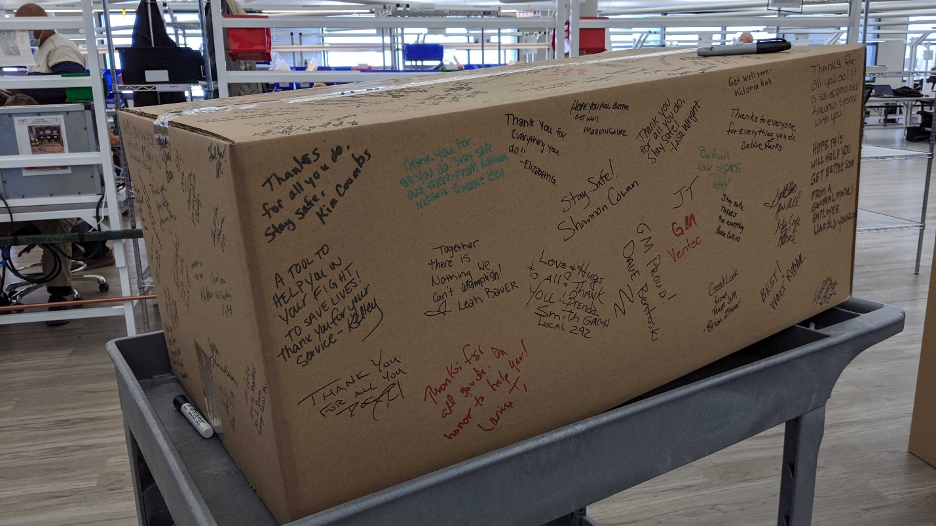 To hear more of this story and learn about the corporate culture that made this rapid scale-up possible, Medical Alley members are invited to join Velentium CEO Dan Purvis and VP of Products Mark Lambert of Parasoft for an open webinar on July 14, 12 PM CST.

We’re also dedicating this summer to tell the stories of individuals and organizations whose heroic efforts in time of crisis made our contribution possible. You can get those stories at our blog or track the hashtag #VentilatorHeroes on LinkedIn.