#VentilatorHeroes. Because every role matters.

Testing the VOCSN system during manufacturing requires some highly specialized equipment. Each ventilator system must precisely monitor and regulate things like airflow rates, oxygen ratio, pressure, moisture content, and so on. Ashcroft, Inc. manufactures a series of gauges and meters under its Heise product line capable of extraordinary sensitivity. Our test system plan for Project V called for 5 of them – 2 in one system type, 2 in another, 1 in a third. Multiply that by the total number of each system type we were building, and we were looking at a need for almost 40 units.

To underscore just how sensitive these units need to be, let’s point to our most extreme application: we needed to measure a range of 0-0.6 cmH2O with greater than 0.1% accuracy. For those playing at home, that’s less than 1/100th of PSI. This system isn’t playing around! This is probably why Ashcroft’s standard lead time estimate is six (6) weeks for the order. It simply takes time to build and calibrate each unit to read such low pressure with that level of accuracy.

And of course, we weren’t the only customer asking for help. As with many manufacturers supporting the medical field during this crisis, Ashcroft faced unprecedented spikes in demand to produce sensors and calibration instruments. Due to the customized nature of these instruments, they can’t inventory finished products, so they had to look at how to ramp up production by rapidly expanding capacity. 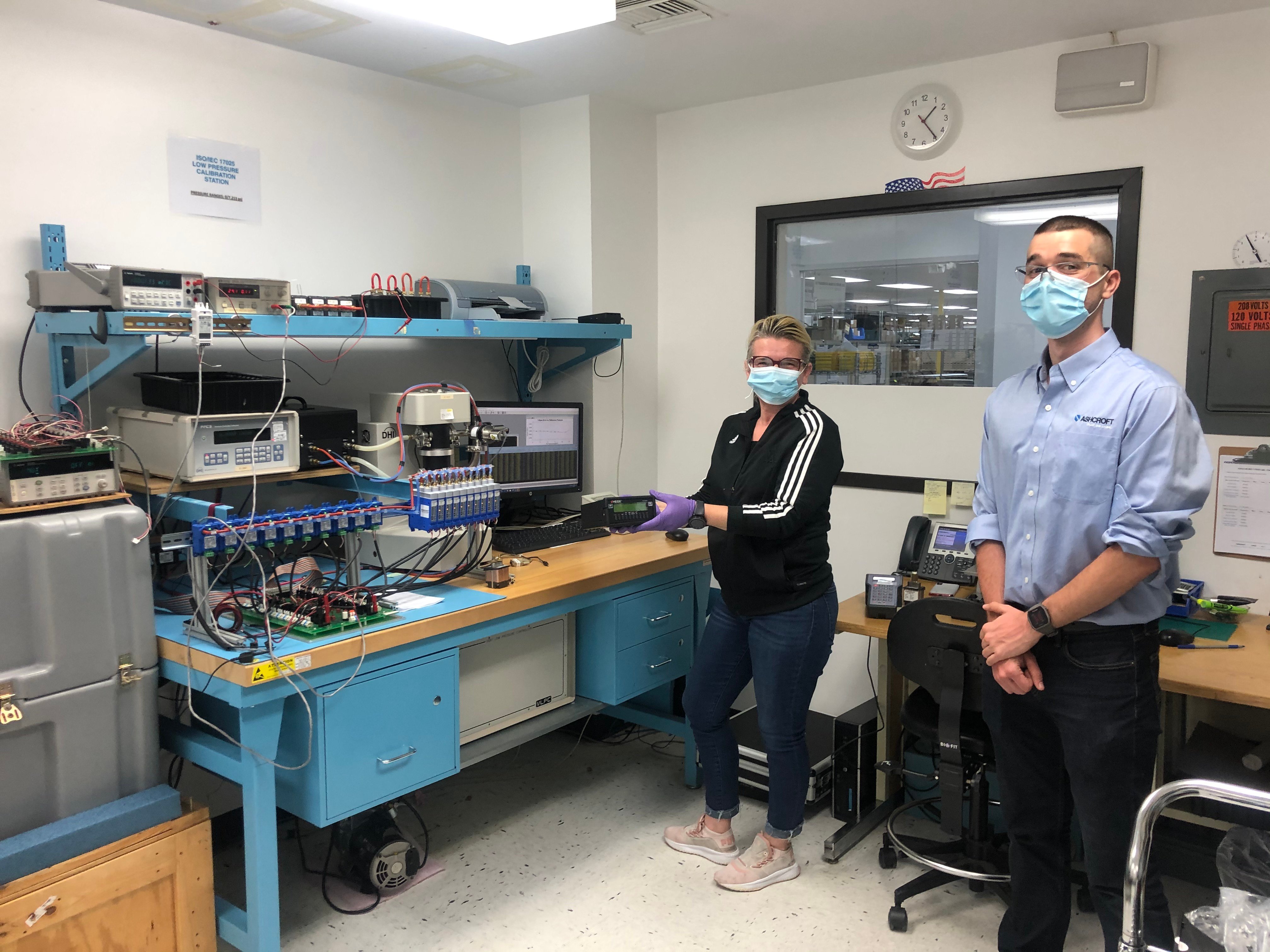 Caption 2: Inside the Ashcroft Quality Assurance Lab. From left to right: JJ, Alex

Six weeks?? When we got that lead-time estimate back, we understood why. But on Project V, six weeks is an eternity. We can’t wait that long for test system parts to arrive – we need ventilators in hospitals sooner than that. (Ultimately, the first shipment of ventilators left the factory just 28 days after the first meeting between Ventec, Velentium, and GM).

Hedging our bets, we submitted a purchase order for the Heise systems anyway. Then we searched far and wide for suitable alternatives because the risk of a 6-week wait was simply too high. We identified and procured a pair of workarounds and called Adam Freyler, Ashcroft’s VP of Sales and Marketing for the Americas, to let him know we didn’t need the Heise order after all.

What we didn’t know is that in the meantime, the Ashcroft team had moved the Velentium production schedule up due to its urgency and had worked to increase production line capacity. Ramping up quickly meant working around the clock. Many members of Ashcroft’s operations team volunteered to work off-hours and weekends to produce and deliver products in days that are typically scheduled for 6-8 weeks. As a result, they were now well ahead of estimate on our order.

Velentium: “Hi Adam, thanks for working with us, but we’ve found a workaround and we don’t need your sensors after all.”

Adam: “You know what, we have the first units ready and would like to send them to you anyway.”

Velentium: “I don’t think that’s a good idea. We’re not going to use them.”

Adam: “We’d like to send them just in case. If you don’t need them, send them back at no charge. We want to ensure you’re taken care of. We believe in what you’re doing.”

It shouldn’t come as a surprise that Ashcroft knows its business as precisely as its sensors know pressure. One of the alternative sensor models we found worked for four (4) out of the five (5) applications our systems required – but not the 5th one. You guessed it: that ultra-low-pressure application, 0-0.6 cmH2O range, was just too low for any other sensor to read accurately. We called Adam back.

Velentium: “We are going to use your units and need six (6) more ASAP!”

Adam: “Understood. We’ll start more going immediately, and the team is willing to work all weekend to get them out.”

Ashcroft’s behind-the-scenes work, prescience, and willingness to take a financial risk by continuing to build, calibrate, and provide the parts even after we (mistakenly) told them not to bother ultimately helped save the build schedule and enabled Project V to get the production lines in Kokomo up and running in record time.

Said the team at Ashcroft, “Working with Velentium made an immediate and lasting impression upon us, and we were very grateful to play our small part in this vital project to save lives.”

Hail to the Ashcroft/Heise team – true #VentilatorHeroes! Thanks for backing up your exceptional products with exceptional customer care. The Project V team couldn’t have done it without you.